Sometimes called “Angry” behind her back, Angie gets flustered easily under pressure, but is generally soft-spoken and keeps to herself. Since her introduction, she and Kurt seem to have bonded somewhat, perhaps due to a mutual love of zombie and horror movies. After her ex-boyfriend Midnight broke up with Angie because, as a Christian, she chose not to have sex with him, Angie began hanging out with the rest of the staff more, particularly Sunny, a fellow Christian.

In the spring of 2008, Jason and Angie started dating, and despite a rocky beginning, she seemed to have somewhat of a calming effect on him. But after Jason dragged Angie into a second major argument about religion, the two broke up amicably.

In addition to horror flicks, Angie also loves comics. While it was running, her favorite comic strip was Ali Graham’s HOUSD.

She started dating a guy named Duncan back in Winter 2009; they seem to be doing alright, since they're still together. Angie was promoted to Lead Usher in Spring 2010.

While filming the gang's zombie movie, Duncan and got engaged to be married. When Jason seemed evasive about congratulating her, she confronted him and in the ensuing argument, he confessed that he didn't think it was a good idea for them to marry at their age, which Angie took offense to.

At the same time, she was upset with the cowardly nature of her role in the film, which she thought was stupid and cliché. Not realizing that Kurt had written most of the script, not Jason, insult combined with injury to bring out another argument between Jason and Angie.

In the end, she quit from both the movie and the theater, but quickly found new employment as a receptionist for Hagen Animal Clinic. She remained on good terms with Kurt, Sunny, Chase and the rest of the Multiplex staff, many of whom attended her wedding in June 2012. Angie took Duncan’s last name (Yun).

After viewing the gang’s zombie movie, Angie quickly forgave Jason, and they are on good terms now. (She’s a very forgiving person.) 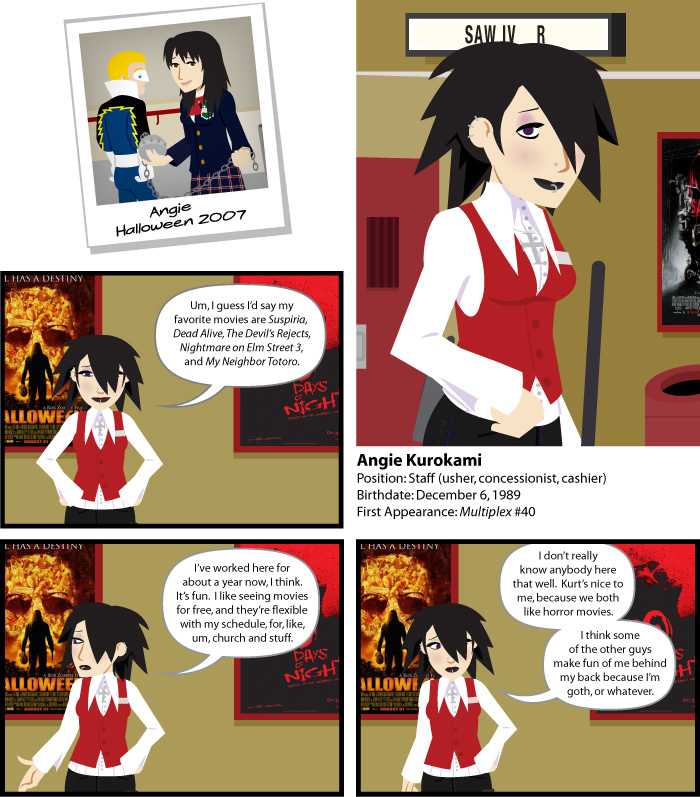