Devi is known to have worked at the Multiplex 10 prior to her first appearance in the strip. At that time, she was dating someone and shared a minor flirtation with Jason. Back at the Multiplex the following summer, except single, they recommenced their flirtation and eventually began dating.

When Devi returned to school at the SVA in New York City in the fall, they continued seeing each other long distance. Devi returned to the Multiplex 10 again, in the summer of 2007, but Devi and Jason had a rocky transition back to a same-city couple and soon broke up, whereupon Devi quit the Multiplex 10 and decided to finish the rest of her summer back in New York.

Devi started dating someone a few months later. She returned to Chicago for an internship in the summer of 2008, but didn't drop by the theater very often.

Recently, after graduating from the SVA, Devi decided to move back to Chicago, to be near her family. Apparently single now, her and Jason started hanging out again… not entirely platonically, but called things off when Jason decided he wanted to see where things were headed with another girl.

They’ve remained close friends, however, occasionally hanging out or visiting classic movie theaters so she can photograph them. She gave Jason her old camera for Pancha Ganapati in 2009, in order to help foster his burgeoning interest in old theaters.

She works as the assistant to a wedding photographer. While photographing a wedding in January 2011, she met her current boyfriend, Rakesh. 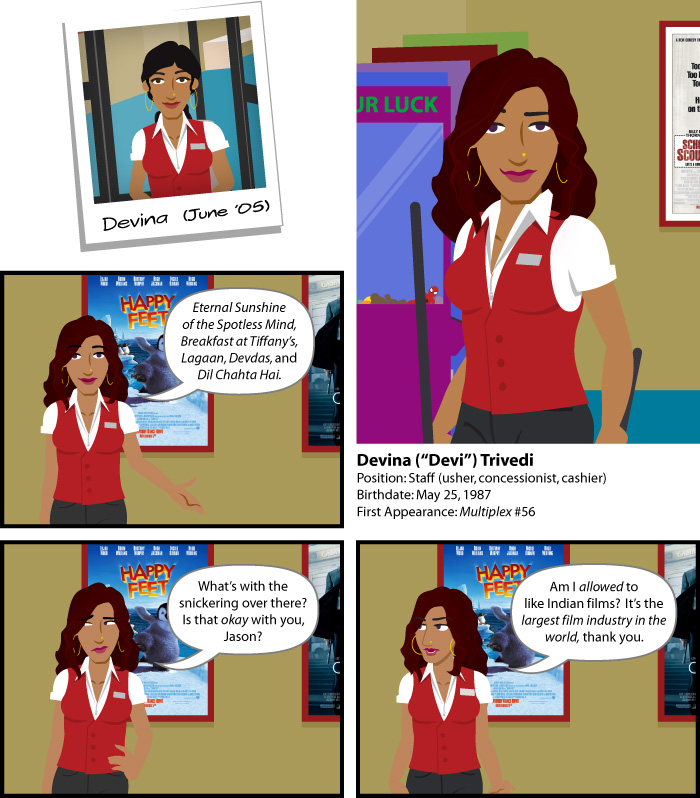