Melissa is Kurt’s girlfriend (and as his girlfriend, she puts up with a lot). She is considerably smarter than Jason and has a younger sister. On the radio, Melissa uses the callsign “Racer Aslyum,” a modified version of her name spelled backwards.

Generally patient with the boys, despite their (lack of) maturity, she occasionally has to dole out some tough love. But after Kurt finally succeeded in scaring Melissa with one of his pranks (for the first time in over three years), she finally broke down and embarked on a campaign to get him back…

In early 2009, Kurt and Melissa seemed to start arguing a lot, apparently stemming from Kurt saying that he didn’t feel Jay working at the Multiplex was a good idea, because of his relationship with Becky — but it all, or most of it, at least, turned out to be a plot to convince Gretchen that Melissa and Jason were having an affair. (Gretchen took the bait and, as they hoped, printing the false story in The Multiplex Examiner, getting her fired as a result.)

After serving as Lead Concessionist for a year, Melissa was promoted to Shift Manager in Summer, 2011.

Gradually, Melissa has come to feel that she had been treading water in her life and in search of some kind of change, she asked Norma to recommend her for a “floater” position with Feature Cinemas, the theater chain that runs the Multiplex 10. 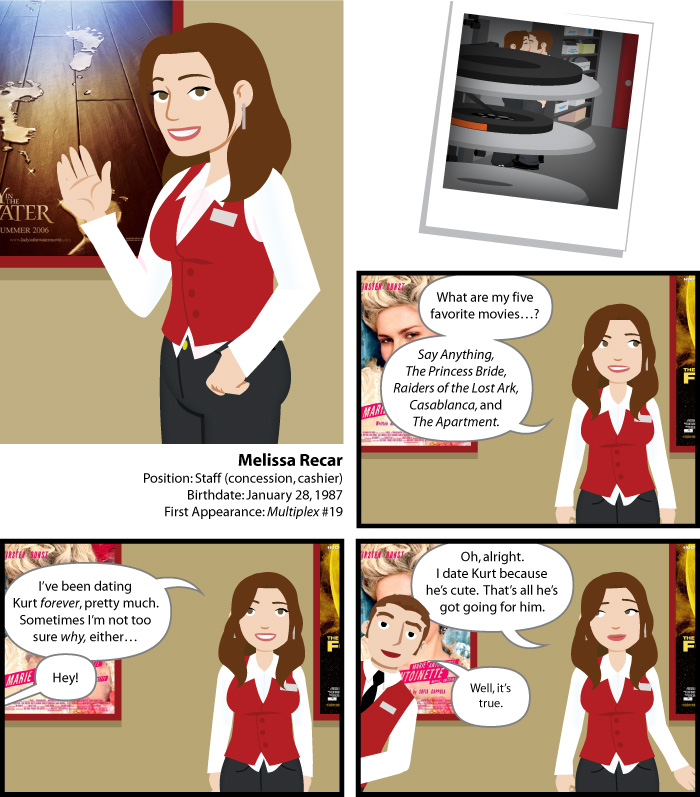