Whitey’s father is a former funk & soul musician who married into a wealthy family with ties to the pharmaceutical industry. One of his former bandmates is the daughter of James Harris, the Multiplex 10’s security guard. Apparently this love for Black music was passed on to Whitey, who plays bass and is studying Music at Northwestern University. Whitey might take it a bit far, though.

At the Multiplex, Whitey and Lizzie spend an awful lot of time together, and he seemed to have something of a crush on his fellow stoner, but started dating Ariela earlier this year until he learned that she was two-timing on him with Max.

“Whitey” is also a nickname of sorts; it’s short for “Whitman.” Whitey long insisted that he goes by “Dub,” though no one besides Neil and Ariela ever called him that until the rest of the Multiplex 10 gang learned that he was in a funk & soul cover band called Higher Ground with three of his classmates from Northwestern — and that they were, apparently, extremely good.

Dub and two of the members of the band — Clyde and Hatterman — recently kicked out their lead singer/guitarist Dominic for being too lazy to learn new (or original) songs. They started a new band, Yo Mamma, which is now Dub’s full-time job. 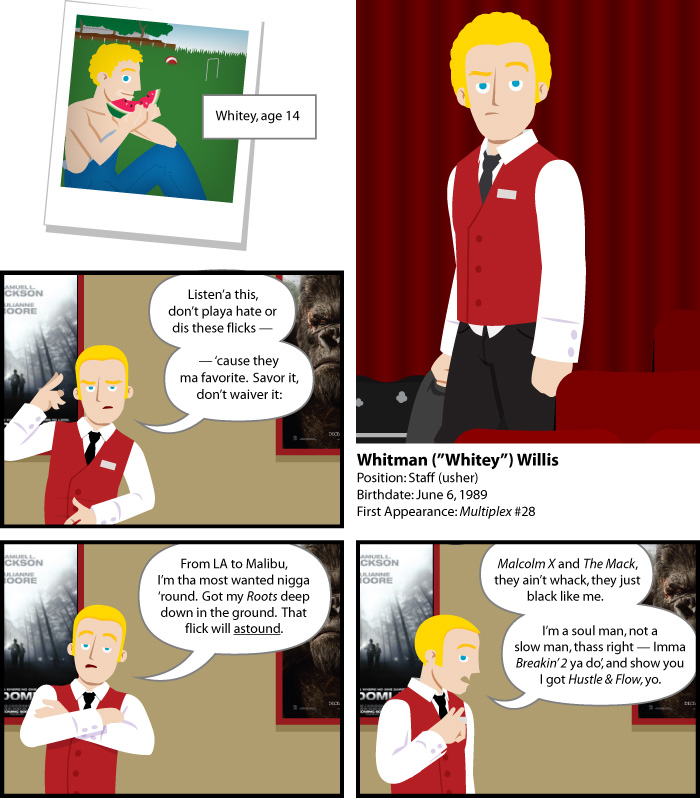